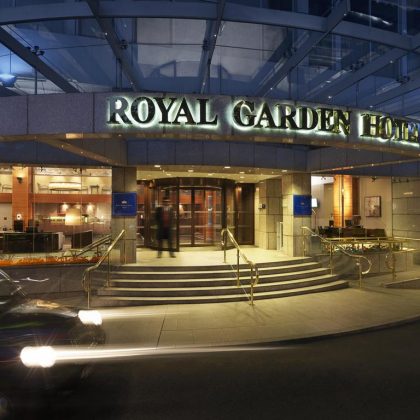 Lift 11 in the Royal Garden Hotel is an essential goods lift for the hotel and is used for major deliveries servicing the hotels functions and exhibitions.

The original lift was installed 1963, but had not been modernised and was subsequently worn, misused and in an unreliable state to the point where major failure was imminent.

As the incumbent maintenance provider for the hotel, Guideline were awarded the contract to replace this particular lift. After extensive research and proof of concept we consulted with The Royal garden and chose the Twin Ram hydraulic heavy duty goods/passenger lift. Reliability was a key metric not surprisingly and our choice has proven to be a fine decision, continued reliability is one of the things that only becomes apparent when the lift doesn’t work- job solved here and the customer is delighted with the efficiency and ease of use.

As part of the process the existing borehole was capped and a new installation completed. All building works necessary were included as part of the lift contract to provide a “Turn Key” project. The works were completed under the CDM regulations and Guideline were the principal contractor. The good news is that the customer continues to work with Guideline and we are part of the on going structure.

Guideline was called in to help with a project for Chanel London, the building was being modernised and the client requested a robust lift to suit the demands of an high end fashion store.
View

Guideline Lifts helped to install, update and refurbish the existing lift for the Royal Borough of Kensington and Chelsea as their equipment that was currently installed needed updating & coming to the end of its life cycle.
View

We successfully tendered for the replacement of a conventional 8 car group supervisory based call management system, with a Hall Call Destination system, together with the maintenance of all lifts within the building against formidable opposition, including major multi-national companies.
View

Following a tender process, Guideline Lift Services secured the contract for the complete replacement of the lift with an electric traction machine room-less lift including removal of the existing lift and completion of all associated building works.
View

Guideline lifts secured the contract for the replacement of two original 1930’s passenger lifts with modern machine room-less passenger lifts, which were specifically designed to compliment the “Art-Deco” style of the building.
View